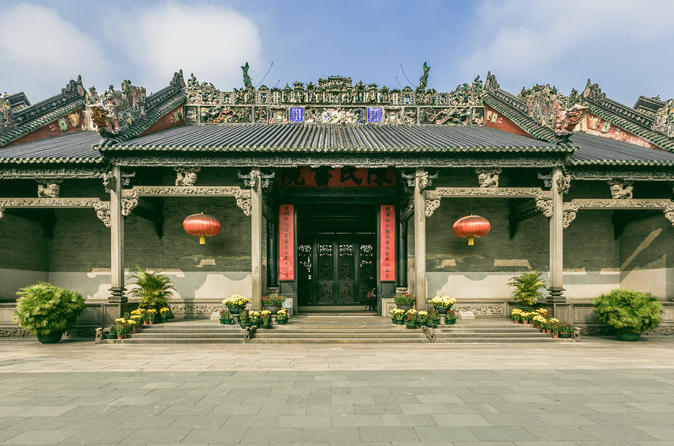 The best way to know the history of the city of Guangzhou is to take public metro to explore the cultural sites including the original site of the Tomb of the Nanyue King of the Western Han Period, Academy of Chen Clan, Shamian Island, Pearl River, and Canton Tower...etc.

At 9.30am, your guide will wait for you in the hotel lobby of China Hotel, A Marriott Hotel, Guangzhou (122 Liu Hua Road, Guangzhou) near the reception with a signage of Viator. Then you will walk to the Museum of the Tomb of the Nanyue King of the Western Han Period, where you will go inside the original tomb that was excavated in 1983 while constructing a hotel here. The tomb proves the long history of Guangzhou that can be tracked back to 2,200 years ago. There is an exhibition hall to display all kinds of relics excavated in both the tomb and Guangzhou.

Afterwards, you will climb up Yuexiu Park to view the token of the city, 5 Rams Sculpture. The local legend goes that five immortal beings wearing robes of five colors came to Guangzhou on the backs of rams. Each being carried rice and gave it to the people as a sign that Guangzhou would be free of famine. A sculpture was erected in Yuexiu park in 1959 to pay tribute to this story, and to the origins of the name Guangzhou (meaning five rams). You will also view a section of the Old City Wall of Guangzhou in the park, which was built in Ming Dynasty about 600 years ago.

Then, you will take metro to Academy of Chen Clan, or The Chen Clan Ancestral Hall, which is an academic temple built by the 72 Chen clans for their juniors' accommodation and preparation for the imperial examinations in 1894 during Qing Dynasty. Academy of Chen Clan is a complex with traditional Canton architecture style which is notable for its rich decoration that adorns both the interior and exterior of the halls as well as in almost every beams, ridges, walls and columns including a large collection of wood carving, stone carving, brick carving, pottery, plaster and iron engraving.

Later, you will take metro to Shamian Island and wander around the European architectural style area which was former colony for British and French 100 years ago. Your guide will then take you to a local restaurant to taste delicious Cantonese Dim Sum for the lunch. Then, you will take a public boat ride from here to Canton Tower on the Pearl River to view the river, buildings and bridges on the boat. The impressive Canton tower is 600 meters in height; you can view it on the square. If you are interested, you could buy a ticket to overlook the city at your own expense.

The pleasant day trip concludes at the Canton tower where you can take taxi or metro back to your hotel.

The best way to know the history of the city of Guangzhou is to take public metro to explore the cultural sites including the original site of the Tomb of the Nanyue King of the Western Han Period, Academy of Chen Clan, Shamian Island, Pearl River, and Canton Tower...etc.